Saturday 25th January marks Chinese New Year. The date changes every year, between January 21st and February 20th, as the Chinese year follows the lunar calendar. The holiday falls on the second new moon after the winter solstice, (the winter solstice, occurs when one of the Earth’s poles has its maximum tilt away from the Sun), on December 21st.

What happens at Chinese New Year?

In China itself, New Year is a week-long public holiday, just like Christmas in the UK, Chinese New Year is a time for families to come together.

New Year’s Eve is the centre of the festivities where most families will sit down together and have a ‘reunion dinner’, just like our traditional Christmas lunch, the reunion dinner is the most important meal of the Chinese year.

The Chinese population are expected to be at home to celebrate the festival with their families. This explains why even though the festival only lasts 7 days, the manufacturing industry in China can shut down for as long as two months as many workers travel back to rural villages to celebrate with friends and family.

On New Year’s Eve, (Friday 24th January), families with have dinner together and then sit down to watch the New Year Gala on TV. The Gala has the largest audience of any entertainment show in the world and is recognised by Guinness World Records as the world’s most-watched television program! The TV show which lasts about four and a half hours is basically a variety show, featuring music, dance, comedy, and drama performances.

In the UK we can view the televised event via the CCTV website. The Gala starts at 12 noon in the UK, and a few of our locations including The Glassworks in Leicester are streaming the event with a Chinese New Year party. In the past we’ve even had traditional lion dance shows like this example from The Metalworks in Birmingham.

In Chinese culture, the lion symbolises power, wisdom, and superiority. A lion dance is said to bring good fortune and chase away evil spirits. The lion dance is one of the most important traditions at Chinese New Year.

How to celebrate Chinese New Year. 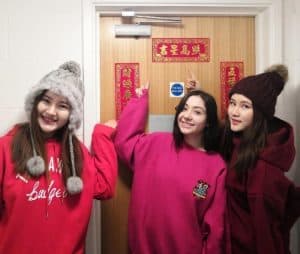 Put up red decorations – Red is the colour and symbol of good luck in Chinese culture and is used in New Year Decorations. You could:

Giving of red envelopes – Adults give lucky red envelopes usually containing money to children during the New Year holiday. Sometimes they are given to employees or friends as well.

Dress for the occasion – Chinese tradition sees many wearing red on New Year’s Day. Red clothing is associated with joy, happiness, good luck, wealth and good fortune. So wearing red will ensure that you’re fully joining in the spirit of the celebrations. Gold is another suitable colour. However, you should avoid wearing too much black during the celebrations. Black symbolises bad luck, and New Year is a time of good fortune and life.

How to say Happy New Year in Mandarin.

You can’t get more traditional than a dumpling, with more than 1800 years of history the Chinese dumpling is a classic good luck food for Chinese New Year. Check out this video to make your own traditional dumplings.

Living with Host in London?

Chinese New Year in London is the biggest celebration of the Chinese New Year outside of Asia. Taking place on the 26th January, the free event takes place in Chinatown, Trafalgar Square and the West End. Expect colourful parades, performances and displays alongside hundreds of thousands of people. Keep up to date with the celebrations with the official #CNYLondon hashtag. The central London festivities take place across the West End, from Shaftesbury Avenue in the north down to Trafalgar Square.

There are activities and foodie goodies in Chinatown; Leicester Square offers a more family-friendly environment. While Trafalgar Square hosts the main stage performances, with more stages on Shaftesbury Avenue and Charing Cross Road. Click here for all the info.

Chinese New Year in Birmingham is big! Around 30,000 people are expected to welcome in the New Year on Sunday 26th January. Just head to the Arcadian Centre on Hurst Street in Birmingham City Centre for authentic Chinese street food, vibrant Chinese music and cultural dances on multiple stages. Find out more here.

Just like London and Birmingham, Chinese New Year is celebrated in Liverpool, from 11 am on Sunday 26th January. The celebrations will blend Chinese cultural history with elements of the modern to bring a mixture of street and stage performances, aerial displays, parades, firecracker displays and a Chinese market on George Street. See here for all the details and follow #CNYLiverpool hashtag for all the latest happenings.

Christmas is a big family celebration which is why the majority of UK students headed home at the first opportunity.

Loneliness doesn’t last forever; it will come and go. Read on to help you understand how you are feeling and the changes you can make.

It's that time of year when the days are shorter, the weather is cold and wet, and after a day studying you just want to get cosy, not go to the gym. That's perfectly okay. Read our tips on how to burn calories another way.