While for many in the UK and other countries around the world, the New Year celebrations of December 31st are a distant memory, the Chinese New Year is yet to begin. But this Friday (16th February), sees the start of the 2018 Chinese New Year. 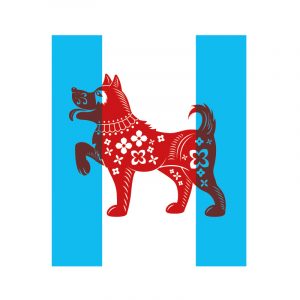 So, why is the Chinese New Year so much later than the 1st January? Well, it’s all to do with the lunar calendar. The first day of the Chinese New Year falls on the second new moon after the winter solstice. It ends 15 days later on the full moon. Which means, the date of the Chinese New Year changes each year, and can fall anytime between 21st January and 20th February. As well as this, each year is represented by an animal in the Chinese animal zodiac which moves in a 12-year cycle. For 2018, it’s the year of the Dog – the 11th animal in the cycle. The recent Dog years are: 1934, 1946, 1958, 1970, 1982, 1994, 2006, 2018. People born in the year of the Dog are meant to be true, honest, loyal and reliable.

It’s not just people in China who celebrate the Chinese New Year. Here in the UK, you’ll find lots of celebrations taking place in cities right across the country. In fact, London’s Chinese New Year event is one of the biggest outside of Asia with around 700,000 people joining in.

London’s main celebrations take place in Chinatown, the West End and surrounding areas with a free event on Sunday 18th February between 10am and 6pm. They’ll be a colourful parade featuring a dragon and lion dance, Chinese street food to enjoy and plenty of other free entertainment throughout the day. They’ll also be contemporary and traditional dance acts and artists on stage in Trafalgar Square, followed by a spectacular pyrotechnic display lighting up Trafalgar Square to end the day. Find out more about Chinese New Year and the celebrations in London here. 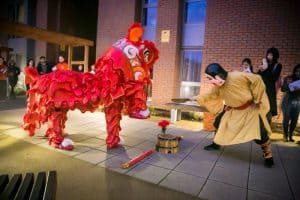 And if you’re living with us at Host, we’re joining in with the Chinese New Year celebrations too. From Chinese decorations and fortune cookies, to Chinese dancers and Chinese food, there’s lots going on. So, pop down to reception and see what your accommodation has planned to celebrate the Chinese New Year and welcome in the Year of the Dog. 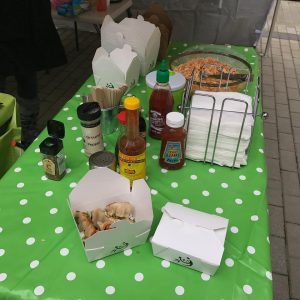 There’s no better way to celebrate the New Year than getting together with family or friends and enjoying some traditional Chinese foods. And there are certain foods you might want to add to the list as they’re thought to be lucky!

If you’re not sure what to wear for the occasion, opting for something red is a good choice. The reasoning being that in Chinese culture, the colour red is associated with happiness and good luck. And if you haven’t got anything to wear, it’s also the perfect excuse to take a shopping trip. Wearing something new is associated with bringing renewed luck for the year ahead. 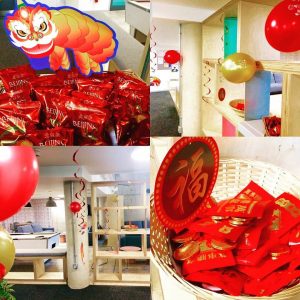 Finally, another Chinese New Year tradition involves the older generation handing out red envelopes or packets (Hong Bao) filled with money. The envelopes are commonly given to children from their parents, grandparents or others. The reason for this is not so much to do with the money inside, but as with wearing something red; the colour is supposed to be lucky and it’s a way to send good wishes.

If you’re looking for student accommodation in the UK, why not live with us at Host? Take a look at our locations or contact us for more information.

Christmas is a big family celebration which is why the majority of UK students headed home at the first opportunity.

Loneliness doesn’t last forever; it will come and go. Read on to help you understand how you are feeling and the changes you can make.

It's that time of year when the days are shorter, the weather is cold and wet, and after a day studying you just want to get cosy, not go to the gym. That's perfectly okay. Read our tips on how to burn calories another way.