Food waste is a global problem causing a variety of environmental, social and economic impacts. When you break it down the scale of the international food waste problem is astounding:

The good news is the UK is a global leader in measuring food waste and supporting international food waste prevention projects. Food waste is a major focus of the UK Government and prevention attempts are growing across the UK. 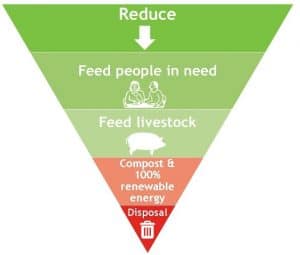 UK companies have a Duty of Care to operate according to the principles of waste minimisation and have a legal requirement to follow the waste hierarchy. The waste hierarchy sets out five steps for dealing with waste, ranked according to their environmental impact. Surplus food should be used to feed people first before it is sent to animal feed or energy.

Currently in the UK, instead of surplus food being used to feed people, many food manufacturers, processors and suppliers dispose of that food via anaerobic digestion or provide it for animal feed. Organisations such as FareShare are asking the Government to bring in a level playing field and ensure that it is cheaper for food businesses to redistribute food than to throw it away.

Tips to reduce and save food waste

Make a List – Before food shopping plan ahead by making a list and only buying what you know you’ll use. Also avoid wasting food by seeing what needs to be used up before you go shopping. Think of a meal to make with those items, check your cupboards for the rest of the ingredients and add missing items to the shopping list.

The art of freezing – freeze leftovers, bread, vegetables and fruit, instead of throwing them in the rubbish.

Keep meat refrigerated – The longer meat is left out at room temperature, the quicker it will spoil. Always shop for meat, poultry and seafood last and go directly home to put it away.

Revive your veggies – A quick soak in ice water for 5-10 minutes can revive wilted veggies.

Overcooked vegetables can always be transformed into soups or sauces – Blend them with stock, milk, or cream. Vegetables like broccoli, carrots, cauliflower and potatoes are excellent for this.

Squeeze the air out – Always squeeze any excess air from plastic bags and containers before putting food in the freezer, this reduces the risk of freezer burn, which is harmless but affects the taste. Freezer burn is what happens when food oxidises in the freezer.

Don’t go bananas – Browning or spotted bananas are perfectly fine to eat. Bruised parts of bananas may be easily cut away or used. Very brown bananas and frozen bananas are great for baking quick breads, muffins, or cakes.

Use it up – 90% of us throw away food too soon. Cook recipes that will use up the food that’s about to go bad. Just because that lettuce has started to wilt, it doesn’t mean it’s time to bin it.

Add all ingredients to a blender, and pulse until combined. Serve immediately. If the smoothie is too thick, add more liquid. If it is too thin, add more fruit and/or ice/ice-cream.